"One of the best all-around reed players in the country today."

"Terry Myers is undoubtedly one of the best all-around reed players in the country today." So said Buddy Morrow, former leader of the Tommy Dorsey Orchestra and one of the great musicians and band leaders who was there for the early stages of the "Big Band Era." "His versatility and expertise on the clarinet and saxophone are a treat to the ears",

"Buried in the various nooks and crannies of the country is unheard-of jazz talent equal to those who bear the most familiar names. Such is the case of saxophonist Terry Myers....The man has certainly got it going on."

An Iowa native, Terry was a member of the US Marine Corps Reserves for five years. After college, where he majored in music and education, Terry honed his musical talent and soon developed a successful career in Nashville and New York City. When Terry decided to move to Florida, he quickly became one of the most in-demand musicians in the state. He was a band leader at Disney World's Epcot Center for four years and, for a time, led the band at Rosie O'Grady's, which was part of the popular Church Street Station entertainment complex in downtown Orlando.

In 1990, he became one of the original members of Bill Allred's Classic Jazz Band, performing at jazz festivals all over the United States, Europe, and Asia. He has appeared at the North Sea Festival in Holland, the Birmingham, England, Festival, the Cork Festival in Ireland, the Bern Festival in Switzerland and many others. He, himself, has also toured the world as a guest artist on both clarinet and saxophone to rave reviews. 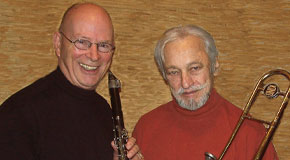 In the past, Terry has performed with the Tommy Dorsey Orchestra , The Tex Beneke Orchestra, The Les Elgart Band, The Jimmy Dorsey Orchestra, Ray Charles, Don Lamond, Chubby Jackson, Louis Bellson, Bob Haggart, Jake Hanna, Butch Miles and many others too numerous to name. In addition, he led the Artie Shaw Orchestra when former leader, Dick Johnson, was on hiatus, and Terry was always Buddy Morrow's "first call" to sub for him with the TDO.

In 1992, Terry was invited to form and lead a "Tribute to Benny Goodman" orchestra, which performed successfully for many years at such attractions as Busch Gardens in Florida and Virginia, Cypress Gardens and Silver Springs, as well as most of the major concert halls in Florida and across the country. In reviewing one of Terry's albums, "Soul Mates", Dick Bogle of the Portland Scanner wrote: "Buried in the various nooks and crannies of the country "Since then, Terry 's subsequent CD's have earned him accolades from music critics and organizations such as Downbeat Magazine, and his latest release for Arbors Records also received rave reviews. According to JAZZ TIMES: "The sheer joy of Myers' music comes out swinging as he bops an unaccompanied intro and plays...'Them There Eyes'." From JERSEY JAZZ: "...from his first notes, I had my eyes opened with delight."

Now featured with the Tommy Dorsey Orchestra, Terry is an exceedingly charming host who puts the audience at ease and then wows them with his and the TDO's musical presentation.