This is a page dedicated to the legend. 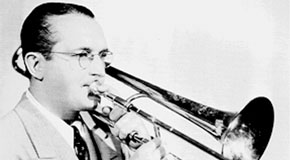 In Big Band history, the Tommy Dorsey Orchestra is recognized as one of the best all-around dance bands. It could swing with the best of them, and no other band could come close to Tommy's when it came to playing ballads. Tommy Dorsey, "The Sentimental Gentleman of Swing", was a master at creating warm, sentimental, and always musical moods – at superb dancing and listening tempos. Tommy sustained these moods through the arrangements of the likes of Paul Weston, Axel Stordahl and Sy Oliver, and he showcased singers who could project them brilliantly.

Frank Sinatra's career blossomed with Dorsey, and, with Sinatra's vocals, the band became more successful than ever.

Jack Leonard sang with the band for about four years, recording such fine sides as "Dedicated To You", "If It's The Last Thing I do", "Little White Lies", "You Taught Me To Love Again", "Once In A While", and, probably the most famous of all, "Marie". With the band singing vocal riffs as Jack sang the straight lyric, "Marie" was so successful that he recorded several more standard tunes with the same formula. They include "Who", "Yearning", and "East Of The Sun". "Song Of India", the other side of "Marie", was also a huge Dorsey hit.

Frank Sinatra's career blossomed with Dorsey, and, with Sinatra's vocals, the band became more successful than ever. Frank had often admitted that listening to Tommy helped him develop his phrasing and breathing, along with his musical taste and knowledge.

Sy Oliver infused the band with a new musical spirit. It was a gentler version of the rocking, rhythmic sounds that he had created for Jimmy Lunceford, toned down somewhat and played with more precision by the Dorsey Band. These original tunes included "Easy Does It", "Quiet Please", "Sing High", "Yes, Indeed", "Swingin' On Nothing", "Well, Git It", and "Opus No 1". Oliver also had a unique way of approaching a straight pop tune, injecting a soft, two-beat feeling into. He did this with resounding success in such arrangements as "What Can I Say After I Say I'm Sorry? ", "For You", "Swanee River", "Mandy", "Make Up Your Mind", "Chicago", and "On The Sunny Side Of The Street".

The vocalists worked both individually and together, turning out several hits of superior quality. There was Sinatra's "This Love of Mine", Jo Stafford's "Embraceable You", the Pied Pipers' and Sinatra's "There Are Such Things", "Just As Though You Were Here", "Street Of Dreams", and "Oh, Look At Me Now". Their biggest hit of all, the one that established vocal groups forever, was "I'll Never Smile Again".

The Band was at its best in this decade. In the summer of 1941, it outranked every other band to finish first in one of the most indicative of all popularity polls, Martin Block's Make Believe Ballroom contest.

By late 1946, it was becoming apparent that the band business was having problems. In December 1946, eight top bandleaders announced they were calling it quits – Woody Herman, Benny Goodman, Harry James, Les Brown, Jack Teagarden, Benny Carter, Ina Ray Hutton and Tommy Dorsey. Essentially, this was the official end of the Big Band Era. However, it was Tommy Dorsey who, in the years immediately following, fought the case of the big bands with words and action. Less than two years later, he was fronting a formidable new group.

The music world lost Tommy at an early age, but his legacy of great music has transcended time. The Tommy Dorsey Orchestra still represents explosive and swinging Big Band entertainment at its very best.